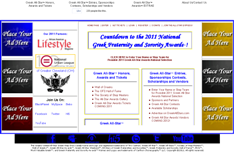 The new GreekAllStars.com streamlines Submissions of Sponsorship Ads for the Greek Scrolls™, allows for virtually effortless All-Star Contests Entries, detailed Scholarship Applications and multiple Scholarship awarding opportunities, now allowing site visitors to advertise directly on their website to the tens of thousands of site visitors for below-market costs, aimed directly at Greek-letter organizations and institutions of higher learning, and much more.

“We are excited about the new site upgrades and redesign and thank VisualEmix.com for their assistance and great site template,” says Tim Carthon, National Greek All-Star™ Awards™ Founder and Executive Director, “This is one of many steps in moving toward the national launch of our Greek Awards™ showcase, but we are even more excited about our upcoming events leading up to and including our Greek United! All-Star Greek Step Showcase® Awards finale.  In the coming weeks we will be announcing the venue and when tickets will go on sale for this year’s awards event, along with a very big announcement regarding one of our biggest partners, so stay tuned.”

Entries for possible Greek All-Star™ and All-Star National Team selection will begin in coming weeks and will be announced by the National Greek Fraternity and Sorority Awards® on its site and various social networking mediums.