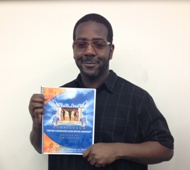 CLEVELAND, OH – March 19, 2013 – The National Greek All-Star™ Awards™ announces that its Executive Director has completed the full development of a brand new curriculum for the Young Greek Leadership Program™, also known as the YGLP™.

Supported by a combination of public figures, educational institutions, and partners such as the Urban League of Greater Cleveland, Ohio Senator Nina Turner, the Cleveland Metropolitan School District, the Cleveland Cavaliers®, and the Cleveland Council of Black Colleges, the YGLP™ is a unique program created by Tim Carthon, Creator and Director of the Young Greek Leadership Program™, for middle and high school students, grades 7-12.

Through Tim Carthon’s Positive 8™ System, theYGLP™ is designed to teach students priceless lessons through consistent actions, not verbiage alone; to mold “young coals” into “budding diamonds” and prepare those diamonds for college and its afterlife through four (4) important subject matters and four (4) distinct character traits.

To sign your child or student up for our YGLP™ Program or any other of our youth programs or to book Tim Carthon for a speaking engagement at your university and/or middle/high school, Contact Us or the Great Black Speakers Bureau.