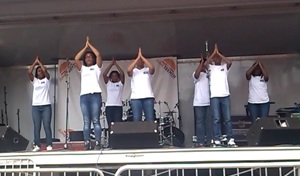 CLEVELAND, OH – June 22, 2013 – Today, the National Greek All-Star™ Awards™ Young Greek Leadership Program™ Students performed at the Juneteenth Festival, hosted by the Call and Post Newspaper; the oldest and most influential voice for African-Americans in all metropolitan regions throughout Ohio (Watch Videos of Their Performance Here).

“I was happy to receive the invitation from Valarie Battle for my Students to perform at the Juneteenth Festival. I was even happier that she and the Call and Post recognized what it was and is we are trying to do in the community with and for at-risk youths,” said Tim Carthon, National Greek All-Star™ Awards™ Executive Director and YGLP™ Founder, “And, seeing as though stepping was derived from African-Boot Dancing and the Juneteenth Festival is a celebration of African-descendants’ emancipation from slavery, it was an obvious match made in rhythmic heaven.”

Supported by a combination of public figures, educational institutions, and partners such as the Urban League of Greater Cleveland, Ohio Senator Nina Turner, the Cleveland Metropolitan School District, the Cleveland Cavaliers® through their generous donations, and the Cleveland Council of Black Colleges, the YGLP™ is a unique program created by Tim Carthon, Creator and Director of the Young Greek Leadership Program™, for middle and high school students, grades 7-12.

To sign your child or student up for our YGLP™ Program or any other of our youth programs or to book Tim Carthon for a speaking engagement at your university and/or middle/high school, Contact Us or the Great Black Speakers Bureau.